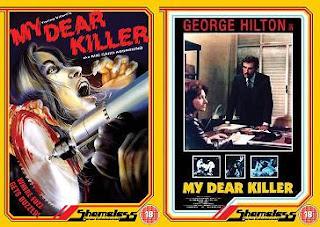 Whats this? A giallo with a power saw killing that I haven't seen? Inconceivable! (Yes I watched Princess Bride again recently, what of it!) Nice cover, well the one with the power saw, the other one looks like a visual representation of tedium. I recognise the director's name from multiple viewings of the Dollar's trilogy as well as My Name Is Nobody but there's nary a nag in sight here. OK let's get watching....

A nice day by the lake becomes a nice pre-credits decapitation sequence as insurance investigator Paradisi (moron) fails to notice the murderous intentions of the bloke in the bulldozer behind him.

There's bin a murrrrrder! (RIP Mark McManus)
Starting with the filthy old gyppo and his cadaverous girlfriend that live near the lake. He get's sweet FA from these two except unsolicited info on their sex lives (shudder) so he moves on. But first it's dinner with the wife and surely there's some sort of bi-polarity going on with this couple - marvel at the speed with which they go from laughing over dinner to chucking insults at each other to trying to make a baby via the most awkward onscreen kissing ever filmed!

Any old iron............
Turns out Paradisi was onto something relating to the kidnapping and death of a little girl and her father which opens up a whole new line of enquiry for The Tache. Faced with further explaining the plot I find I'd rather slice my fingers off with a rusty hacksaw....one by one...so suffice to say it's long on complications and sadly short on inventive killings; a hanging, a strangling and a powersaw that needs sharpening as it doesn't seem to actually slice the skin. The inimitable Tache does a lot of pacing, looking concerned, talking to suspects and babbling inconsequentially with his pal Maro (lots of very Italian hand gestures permeate these supposedly expositionary interludes).

Dance monkey boy, dance!
He also seems to have a softspot for kiddie fiddlers; while questioning sweaty sculptor Beniamino (who hereafter shall be known as Sculpty McPedo) The Tache spectacularly does nothing when he sees a naked pre-pubescent child walking around Scultpy's studio. He just kinda stares at Sculpty, walks away, turns, stares some more, walks away. That's your tax dollars hard at work right there people of whatever-city-this-movie-is-set-in. Similarly later on he's questioning another suspect and tells him that if he talks we'll tear up the report on that previous little incident when he was caught in bed with a 12 year old! Wait...WHAAAT? I was shocked and offended! Then I noticed the 70's style purple, yellow and brown curtains and was violently sick all over myself. This scene does however feature the best line of the film as The Tache threatens his suspect's bodyguard "Don't try it baldy. Gorillas nearly always end up in the zoo".

Another memorable bit of dialogue; The Tache's line to the grieving mother as she shows him her little girls photograph - "Hmmm, yes it's a remarkable likeness" - I'll be using that whenever I'm shown baby pictures from now on, genius! Anyway; more sleuthing, more chatting, more baby making - although he does stop mid-hump to phone Maro and chat some more.

I was just fucking my wife and it came to me!
Things do eventually reach a conclusion with an Agatha Christie style drawing room roundup as The Tache finally gets to play the part of his uber-tached hero Poirot. He saunters around the room revelling in his 15 minutes of fame while the poor suspects sit there thinking please just get on with it. Sculpty McPedo is there as well having a little shitfit on the sofa, dry cleaning will be necessary. Things go all Inspector Clouseau in the last few seconds as The Tache finally gets to the point and reveals the worst piece of evidence in cinematic history EVER and the lights go out! Then go back on! The killer has dived behind a sofa for some reason and is crying like a baby. THE END.

So not what I was expecting at all really. Basically an Italian-style 70's whodunnit with a mild spattering of gore and some Argento-gialli influenced (black gloved killer's POV) murders. Morricone's score is so understated that I missed it! Dare I say it was all a bit boring.....

The zit wasn't ready for bursting.
**Spoilers** Why didn't headless first victim Paradisi recognise the one armed killer, he'd met him before hadn't he? At the very least wasn't he concerned about having a one armed bloke operating heavy machinery? Told you he was a moron, thought I was just being cheeky didn't you!