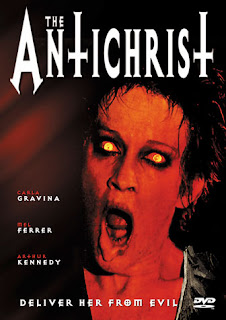 Ippolita (Carla Gravina) has been crippled since a childhood car accident but doctors can't find anything physically wrong with her (other than being a freckly po-faced ginge obviously). In her desperation to find a cure she visits a sweaty, culty backroom, touch-the-holy-relic-heal-yourself type event along with her father Massimo (Mel Ferrer) but she stumbles and falls on her way to touch the statue. Bit strange that she doesn't get another go really, is it only one attempt per person then? She just kinda gets up and leaves. Oh and a demonically possessed bloke (got some green shit on the side of his mouth, that's how you can tell) isn't having any of it, he gets the hell out of there, runs up a wee hill and jumps off into a terrible little bit of rear projection FX that makes him look like he's flying Flash Gordon Hawkman-style down the hill.

Flash! A-aaaaaaarghhhhhh!
Ippolita grumbles and mumbles about how she's never gonna get a shag all the way back home in the back of daddy's limo to the family mansion where her nanny/housekeeper Irene (Alida Valli) and androgynous brother Filippo (Remo Girone) wait with bated breath. Nope she's still in the wheelchair, oh well better luck next time!

Listen honey I need me some sweet lovin, you in or out?
At a party the next day Ippolita meets Dr Marcello Sinibaldi (Umberto Orsini) a psychiatrist that seems to think he can use hypnosis to cure her psychologically and thus physically. During this regression therapy Ippolita relives the car accident but Sinibaldi makes her go further back to a past life in which she was a heretic witch (same actress but blonde and slutty, nice) that was put on trial by the church. Nice flashbacks here, was it the distant past or a post-apocalyptic Brazil-ian dystopia - the decor makes it unclear. Quacktastic Dr Sinibaldi starts spouting complete bollocks at this point "Yes we can cure this woman by clearing up the trauma of her ancestor. You see the personality of a dead person can live on in another person at an unconscious level, especially if that person is marginally psychic like Ippolita".

That sound is David Cronenberg jackin it...........
Turns out she might just be a bit psychic after all though because around about this time Massimo's getting frisky with his Swedish student Greta (Anita Strindberg, well who wouldn't) and Ippolita is 'feeling it' - boy has she got some daddy issues! Cue a brilliantly realised little surreal dream/past-life-memory sequence that cuts between Strindberg getting naked, Ippolita writhing about in ecstasy on her four poster bed (also naked) under a rear projection blue sky and blonde witch Ippolita (yup, naked again) taking part in a bizarre orgy in a graveyard. Over the wall crazy shit in this sequence includes the ripping apart of a frog (Gravina eats the head) and...well...how can I put this....let's just say Ippolita tosses a mean goat salad, daaaaaaaaamn! Felt a sudden urge to scrub my tongue with bleach after this scene. Oh plus the invisible man rape bit seen here long before Verhoeven's Hollow Man or Babs Hershey in The Entity for that matter.

I think she's had enough. Who's the designated driver tonight Bob?
All this gets Ippo going apparently because no sooner has she showered (and hopefully brushed her teeth) than she's out the door and grabbing herself a blonde-haired toyboy to hump silly during a tour of the coliseum - she's quite the shag apparently as the poor boy ends up with his head twisted all the way around!

Damn she was good!
After another sesh with Dr Bollocks we're told she is now cured and indeed she does get up and walk! Let's celebrate with some dinner. The festivities don't last long however as Ippo starts choking on meat, drooling and talking about cock quite a bit. Guess who's come to dinner......legs akimbo on the table, that can't be hygienic. Hilarious dialogue here from Dr Bollocks; "It's all in her mind" he shouts amidst a Fantasia-like scene of flying paintings and plates. Hell even the furniture's trying to get the fuck out of there and has to be held down! It's shortly after this that the doc decides he's had enough and bows out of the picture - what a guy, he's brought out bloody Satan; might as well have pulled his trousers down and dropped a steaming turd on their persian rug and now he's apologetically sidling out of the front door.

Dammit I always burn my mouth on those McDonald's apple pies!
Housekeeper Irene however is made of sterner stuff. After spotting Ippo getting a little incestuous with creepy sibling manchild Filippo she decides enough is enough and heads down to the village to hire a badass local 'fixer' or skeezy old tramp that knows a few demon banishing tricks so....

**ding, ding** Round One. Trampy McExorcist Vs Satan. Trampy gets off to a good start with some voodoo doll pricking. But no; Satan was just pretending to be affected and laughs at him. Trampy pulls out his essential oils and starts daubing Ippo. Satan responds by disconnecting Ippo's arm and having it strangle Trampy from all the way across the room. Trampy's on the ropes now. Satan pulls out all the stops and makes Ippo levitate (very unconvincingly) out of the window and then back into the room, wow! To top it all off Ippo spits out some green shit and makes Trampy lick it out the palm of her hand. DEFEAT!

Aren't I lucky, I got a chunky bit!
**ding, ding** Round Two. The Bishop (of PAIN) Vs Satan. In goes Ippo's uncle Bishop Ascanio Oderisi (Arthur Kennedy, slumming it). The Bishop has a poor showing here, nervous and sweaty from the start he can't handle the pressure and all it really takes is a few insults, the setting on fire of his bible and the sight of Ippo's vadge to make him run out of the room and call the Vatican for assistance. DEFEAT!

Muff said.........
**ding, ding** Round Three. The Austrian Monk Vs Satan. They've called in the sandal clad beast that is Father Mittner (George Coulouris) to put an end to the horned one. By now poor Ippo looks pretty much like Gollum in a nightie and she's taken to controlling her wheelchair with her mind (so it's Satan that powers Patrick Stewart's chair in X-Men, I knew it!) and she's got a wind machine and a seemingly endless stream of 45 rpm singles to throw at this old geezer. He also takes Irene in for backup, good call seeing as she gets the faceful of green shit this time.

Phew, that was close!
I won't spoil the end for you. I will say it involves a huge wooden cross and the first ever Catholic church approved abortion. Yes she did shag Bowie wannabe Filippo, no matter how much he shakes his head, we know he did it.

Thoroughly enjoyed this one. Over the top Exorcist clone - stop being silly and trying to compare this one to The Exorcist web reviewers - enjoy it for what it is. Cinematography by Aristide Massaccesi (that's right Joe D'Amato himself), score by Ennio Morricone & Bruno Nicolai! And featuring a veritable who's who of genre talent.
Posted by GPR79 at 17:00