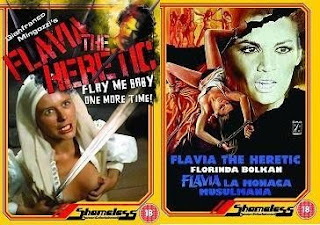 Dipping yet again into my pile of unwatched, unloved trash this week another of Shameless Screen Entertainment's lovely lurid yellow covers poked through and screamed to finally be viewed........

First off kudos to Shameless for the reversible dvd cover, I went for the one on the right!

Fifteenth century Italy; Muslims Vs Christians, a precocious Christian girl, Flavia, watches the battle and catches the eye of a young Muslim soldier, hello sailor, her father notices and decapitates the heretic, his head wasn't in the game apparently. The girl then gets sent to a convent. A short Cell Block H-style montage later and Flavia's all grown up (into Florinda Balkan of Lizard In A Woman's Skin & Candy cult fame) - she's not ecstatic about being a nun though.

The flying nuns forgot their parachutes again!
Things liven up for the cloistered when the cult of the tarantula comes a-calling, essentially a squad of drugged up hippies that gatecrash the monastery and proceed to hump the walls and make a general nuisance of themselves while singing the 'tarantula song' before being ejected. Unfortunately one of the nuns succumbed to the lure of the tarantula (she of the left dvd cover) and got a bit sweaty. The punishment for this? Five Hail Marys and three Our Fathers...nah only joking, it's torture and death of course (via scalding and nipple slicing)!

Flavia's serious face.
Flavia's had enough of this male dominated religion, world, post-apocalyptic wasteland (well it might as well be) so legs it out of the convent with her father's Jewish accountant, in no time at all they're both caught and Flavia is flogged, she got off lightly IMHO after what happened to the last penguin. A little while later Flavia goes on a trip to market with batshit crazy Sister Anges and her big stick. Agnes' brief lesson in public urination and masturbation is cut short however when those crazy Muslims attack again. Flavia understandably figures WTF, how bad can they be compared to the Christians she knows and despises already so before you can shout HERETIC! she's jumped on a horse with diminutive pretty boy Muslim Ahmed (Anthony Higgins, wasn't he in Law & Order UK last week, he was!) and eventually off the horse and into the sack. Despite basically telling Ahmed he's a crap shag she still convinces him to help her get her revenge. Scenes of depravity ensue at the convent as the Muslims provide the nuns with hallucinogenic drugs and everyone loses their shit in grand style.

Sister Livia - convent hide and seek champion 1462
Wimples-a-go-go night soon becomes whoops-everyones-dead morning and Flavia rides out with Ahmed to finally confront her father. She kits herself out in armour and weilds a sword because you know she's had all that weapons training, wait I mean nun training? Anyway I won't spoil it for you but let's just say things don't go great for Flay-via in the end!

OK I will spoil it for you.
By the look of it I was all set for a bit of medieval style nunsploitation but I was pleasantly surprised by this one in that it takes things a little more seriously than your average Italian exploitation flicks of the time, or at least it tries to. The cinematography, effective haunting melody and Balkan's acting are all quite good. The attempts at serious feminism become somewhat laughable however in a film containing this much copious female nudity and sexual torture. The men in the film don't exactly get off lightly either with a couple of spike-meet-bottom situations and even a horse de-bollocking thrown in for metaphorical good measure.