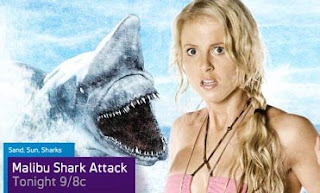 Cast: Peta Wilson and a bunch of unknowns.

Hey don't judge me! You know that film you watch every bloody year, yeah that cheesy one that makes you blubber like a little girl or grin like an idiot with joy, well I watch these z-movies for the same damn reason, get over it! I figure I've made it through Mega-Shark Vs Giant Octopus so how bad can this really be.........

Peta Wilson, formerly the lovely but lethal hitwoman La Femme Nikita (Canadian TV's superior forerunner to Alias), trundles back onto our screens in this direct to video/TV instant classic of the noughties CGI sharkbite genre, it's as if Ed Wood never died. She's looking less lethal, more hefty these days but who cares about that when there's major seismic activity going on off the coast of Malibu (actually filmed in some cheap-ass corner of Australia)! And said earthquaking is causing big holes to appear in the plot, I mean the ocean floor, out of which prehistoric 'Goblin' sharks quickly emerge and start chomping on the locals. For some unknown reason this particular breed of super-dino-shark has a rhinoceros horn atop it's head by the by.

Let me get it out of the way early - this is a bad movie. It's cheap, stilted dialogue, delivered by stilted actors in a lifeguard tower (also on stilts) on the beach but that doesn't stop it from being fun if you like this kind of shit.

Anyway said sharks are already racking up a mildly amusing body count, biting the legs off paragliders and the like, when more of that earthquaky activity hits and yup here comes a 30-foot tsunami to destroy that little low-cost aussie location and of course bring the hungry sharks closer to their dinner. Cue an entire act of the film primarily spent within the confines of said lifeguard tower now encircled by water containing circling sharks. Another couple of classy deaths including the obligatory homage to the Deep-Blue-Sea-Sam-Jackson-ohshitlookout literal shark jump munch. Things take a turn for the better (and the absurd) when they get out of the shack and head to a still-in-construction hotel, also waterlogged, leading to some sharks swimming down the corridors style shenanigans as our soggy protagonists limp away from them and thoroughly fail to find some stairs to run up.

- "Where's George?"
- "I'm sorry there was a shark in the parking lot before before we arrived, if it's any consolation I gutted that shark real good."

He did you know, he blew it up real good. The film probably got a rise out of me the most when the geeky rookie lifeguard trapped in a basement with one of the sharks uses a circular saw to fend it off. As if the movie felt my excitement this scene was quickly followed by another bloke trapped in a workshed finding a chainsaw and, yes indeed, chainsawing shark into sushi. And oh the humanity, the film climaxes in a kind of Basement Chainsaw Massacre wherein the surviving cast attack the final shark with all kinds of petrol powered tools as well as an axe - blood and fins everywhere, nice! All that and an implied threesome with Peta and her current and ex-boyfriend, what more could you ask of a z-movie finale.........

So apparently; not only are "Goblin" sharks extinct they're also extremely rare(?!), metal filing cabinets float, Peta Wilson needs some rent money, navy seals often become lifeguards when they leave the military, oh and flimsy lifeguard towers made of wood can withstand a 30-foot tsunami. Personally I can't wait for the new decade's cgi shark flicks, can you?
Posted by GPR79 at 15:51