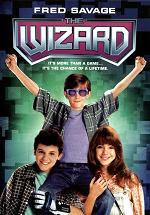 In the halcyon video gaming days of yore, before the internet connected all the 12 years in the world into one big noob pwning network, there was just a bleary eyed kid in his bedroom with a clunky square box and a couple of italian plumbers - no don't call the authorities, it was only The Super Mario Bros. This movie is perhaps a paean to those days of Nintendo-tinged innocence or an embarrassingly out of date guilty pleasure, take your pick.

Fred Savage, child star of 80's TV show The Wonder Years (and the featured serial rapist in an episode of Law & Order: SVU from a couple years ago, damn he was creepy) is in regular proto-adult/precocious child mode here, acting his little fro off at every opportunity as Corey Woods, middle child of Sam Woods (Beau Bridges) a divorced single father bringing up his three sons in the mid-west after the death his daughter some years before. Said tragedy has affected the youngest boy (the twin of the dead girl) to the extent that all he'll say anymore is 'Caaaallifoooornia' in a sort of Governor Schwarzenegger style plaintive wail. Well mom and her new hubby want him put in an institution and Fred's having none of it so he takes his little bro and off they go on a road trip. We all know what Gregg Araki would have done with that little setup but unfortunately this is essentially a Nintendo financed 90 minute commercial so.....

Cue Fred bumping into an equally precocious young runaway (Jenny Lewis) and discovering that little bro Jimmy may be a tard but he sure can play video games. So where else to go but The Ultimate Video Game Championship in California of course. Along the way they'll practice all the latest Nintendo™ games, meet uber-Nintendo youth Lucas and his power glove, a friendly trucker, a kiddie-bothering bounty hunter and most terrifiyingly a pre-pubescent Tobey Maguire. But really the most entertaining part of this, erm, part of the movie is the little b-plot involving Beau Bridges and his eldest son Nick (played by a pre-Nicholson impersonation Christian Slater) as they set out on their own little road trip in pursuit of Fred & Jimmy. Slater and Bridges have fun with it as a disconnected father and son on the road, Slater's brung along his Nintendo and whips it out at every garage or motel, hooks it up and plays away, to his father's irritation. But of course by the end of the film Bridges is up till the wee hours bashing buttons on Teenage Mutant Ninja Turtles in a sweaty wide-eyed frenzy.

As things reach a conclusion, please let there be an end to this, the kids hit Cali and more importantly the climactic 80's staple - the last act, must win contest/race/tournament, etc. What's this, aforementioned Lucas is the kid to beat and what, what, what? There's a new game, you say, A NEW GAME they will have to play to win the final? That'll be Super Mario Bros 3 then. Once all the scenes of hyperbolic 8-bit gaming and italian plumbers sprouting fox-tails going up and down pipes and violating turtles are over; the winner is announced the family comes together and shockingly enough on the road trip home the story comes to a somewhat moving emotional finale as we discover just exactly what all that 'Caaaallifoooornia' guff was about.

Probably best left in the rose-tinted past, it was fun to see the power glove again.
Posted by GPR79 at 16:23