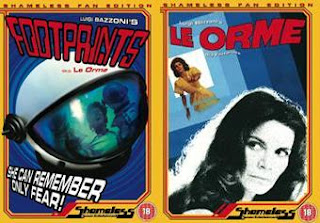 Alice Cespi (Bolkan) awakens from a dream about a man being stranded on the moon. Effective imagery here takes second place to Klaus Kinski's bug-eyed glare of course, not something you want to see coming at you in the dark of night.

Weegie Translation: Ooyah bas mah willies caught in mah zip!
After a coffee and a smoke in her 70's minimalist living space Alice shoots off to work and discovers to her surprise that she's been AWOL for three bloody days. Apparently it wasn't a passed-out-in-your-own-vom drinking spree blackout so she's stumped! Oh wait there's a ripped up postcard of someplace called Hotel Garma in her kitchen dustbin, where did that come from? Well Garma obviously so off she goes to investigate and rack up some airmiles on Alitalia.

Spectacular lack of thrilling images from this film!
As Alice tours her way around Garma and it's peculiarly sparse surroundings she bumps into people that seem to know her and places she finds eerily familiar despite never having been there before. Alice tries to piece together the events of her supposed previous visit to Garma and try to hold onto her sanity as things become ever more paranoically confused.......

That's pretty much it plot-wise folks. And I loved every second of it!

'Alice's adventures in Garma-land' is essentially an atmospheric low-key Lynchian-lite mystery dressed up as a giallo with dreamlike cinematography (Vittorio Storaro; Apocalypse Now) and anchored by another solid performance from Bolkan. Throw in some ecologically apocalyptic dialogue and stock Italian creepy ginger little girl (Nicoletta Elmi; Bay Of Blood, Who Saw Her Die, Deep Red) mix in some trippy B&W nightmarish flashbacks set on the moon and round it all off with a haunting score by oscar winner Nicola Piovani (Life Is Beautiful) - it all makes for quite an experience.

Random unrelated publicity shot of Florinda. Well you don't want another one of Klaus do you?
Despite the somewhat open ended narrative the only questions that really bothered me after the fact were: why is this DVD rated 18 and what the hell is it doing on the Shameless label at all? I like my Shameless euro-trash, you know I do, but this one really doesn't seem to fit in with their exploitation releases thus far. So gorehound/horror fans beware just because it slots in with the rest on your shelf doesn't mean it's another slice of slasher pie BUT give it a chance and you just might be pleasantly surprised. Oh and it seems it's 18 rating is due to the additional content on the disc (namely 20 Shameless trailers) as the film itself garnered a relatively cheery family friendly 12 rating from the BBFC!

Extras of note include an alternate Italian language audio track (with english subs), a promo archive (nice pics of the film's various VHS covers, etc), image gallery, original trailer and a hilarious little US video spot that changes the movie's title to Primal Impulse and proclaims 'starring Klaus Kinski!' he's onscreen for about 60 seconds combined total FFS! Should also be noted that this is a ‘Shameless Fan Edition’ - scenes long excised from the movie have been obtained from the best surviving prints possible, regardless of the quality, and reinserted in order to restore the film to the director's originally intended vision, some of these short scenes have Italian audio and english subs and are of variable quality.

Florinda always 'accidentally' put a special pic in with her holiday snaps!