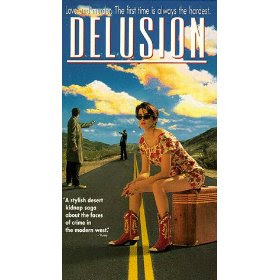 Transmorphers II: Fall Of Man (2009) - yup that's where Jennifer Rubin has ended up, Asylum's latest no-budget, no-talent, straight to your bin, rush released to coincide with a similarly titled blockbuster, piece of shit that only gets rented, downloaded or bought when the poor viewer is in a hurry and doesn't read the movie title carefully enough. Pity really because you catch a film like 1991's Delusion, a sunburnt, dusty, desert road-movie oddity, and you remember she was actually an interesting actress once upon a time. Glass half full and all that at least she's not dead, sorry Mr Orbach :(

Jim Metzler plays George, he's in computing and he's just embezzled a shitload of cash from his company. On his way to Reno he spots a couple having car trouble and offers them a ride. However over-friendly, free spirit, Vegas dancer Patti (Rubin) and her goofy boyfriend Chevy (Homicide: Life On The Street's Kyle Secor) aren't going to turn out to be the best road companions. Turns out Chevy's a hitman on his way to ice his old friend and mentor Larry (Orbach) and he's not fussed if he has to kill George along the way as well.

Metzler plays it cold, the only temperature I've ever seen him do in any film frankly, and if you're a fan of Homicide: LOTS you'll know Secor's bag, always an engaging presence to watch and he doesn't do anything different here which is fine with me. It's really Rubin that shines in this weird little tale, Patti is ballsy but vulnerable in her somewhat masochistic relationship with Chevy, pretending to be as uncaring as her partner but subtly helping George whenever the opportunity presents itself; leading to a botched execution and George getting the upper hand.

So all in all a fun but strange litte film that I just about enjoyed in the end, and talking about the end, not to spoil it, but this one leaves us hanging in something of a metaphysical quandary for poor George, should he become like Chevy? Or was it all just a Delusion? (otherwise what's with that title anyway)!
Posted by GPR79 at 09:26